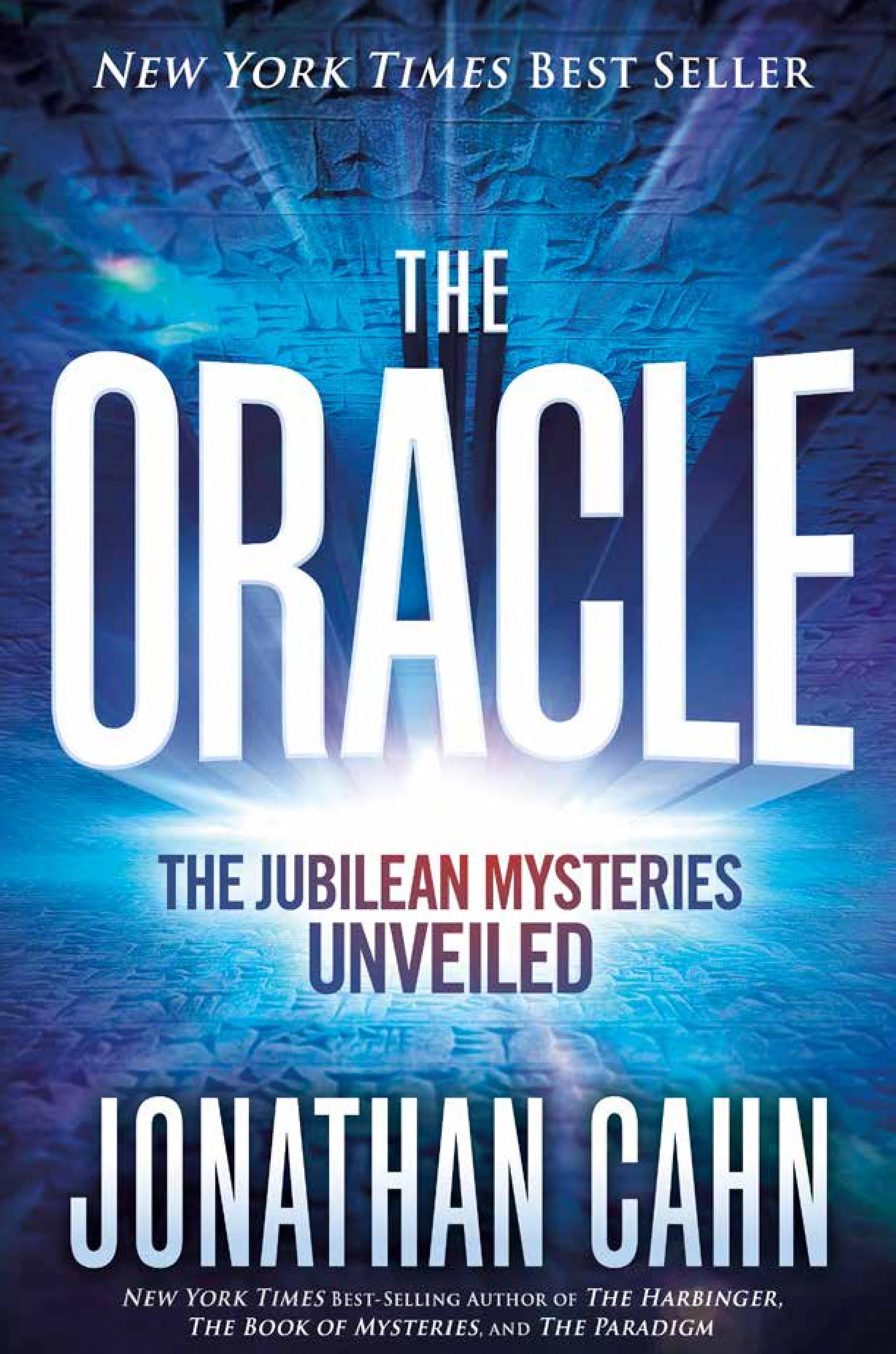 New York Times and USA Today Best Seller! Discover the amazing secret of the ages...and the mystery of your life! The Oracle will reveal the mystery behind everything...the past, the present, current events, even what is yet to come! Open the seven doors of revelation—and prepare to be blown away! Jonathan Cahn, author of the New York Times best sellers The Harbinger, The Mystery of the Shemitah, The Book of Mysteries, and The Paradigm, now unveils The Oracle, in which he opens up the Jubilean mysteries and a revelation so big that it lies behind everything from the rise and fall of nations and empires (even America), to the current events of our day, to the future, to end-time prophecy, and much more. Could an ancient prophecy and a mysterious ordinance given in a Middle Eastern desert over three thousand years ago be determining the events of our day? Could some of the most famous people of modern history and current events be secretly linked to this mystery-even a modern president of the United States? Could this ancient revelation pinpoint the events of our times down to the year, month, and day of their occurring? Could a mysterious phenomenon be manifesting on the world stage on an exact timetable determined from ancient times? Could these manifestations have altered-and now be altering-the course of world events? Jonathan Cahn takes the reader on a journey to find the man called the Oracle. One by one each of the Jubilean mysteries will be revealed through the giving of a vision. The Oracle will uncover the mysteries of The Stranger, The Lost City, The Man With the Measuring Line, The Land of Seven Wells, The Birds, The Number of the End, The Man in the Black Robe, The Prophet's Song, The Matrix of Years, The Day of the Lions, The Awakening of the Dragon, and much more. The reader will discover the ancient scrolls that contain the appointed words that have determined the course of world history from the onset of modern times up to our day. The revelation is so big that it will involve and open up the mysteries of everything and everyone from Mark Twain to Moses, from King Nebuchadnezzar to Donald Trump, from the fall of empires to the rise of America, from a mystery hidden in a desert cave to another in an ancient scroll, from the palace of the Persian Empire to the US Senate, from the Summer of Love to the Code of Babylon, and much, much more. Ultimately the Oracle will reveal the secret that lies behind end-time prophecy and the mystery of the end of the age. As with The Harbinger and The Book of Mysteries, Cahn reveals the mysteries through a narrative. A traveler is given seven keys; each will open up one of seven doors. Behind each door lies a stream of mysteries. The reader will be taken on a journey of angels and prophetic revelations waiting to be discovered behind each of the seven doors-the ancient secrets that lie behind the world-changing events of modern times-and revelations of what is yet to come. Hailed as a mind-blowing masterpiece, The Oracle will reveal mysteries that are absolutely real, amazing, stunning, mind-blowing, and life-changing. Prepare to be blown away. Also Available in Spanish ISBN-13: 978-1-62999-267-9 E-Book ISBN: 978-1-62999-268-6

The husband-and-wife treasure-hunting team of Sam and Remi Fargo return in a new adventure as they search for an ancient scroll--which carries a deadly curse--in this thrilling addition to Clive Cussler's bestselling series. ...

From bestselling comic-book franchise writer Charles Soule comes a clever and witty first novel of a twentysomething New Yorker who wakes up one morning with the power to predict the future—perfect for fans of Joe Hill and ...

A groundbreaking history of the human mind told through our experience of dreams—from the earliest accounts to current scientific findings—and their essential role in the formation of who we are and the world we have made ...

A gripping modern-day detective story about the scientific quest to understand the Oracle of Delphi Like Walking the Bible, this fascinating book turns a modern eye on an enduring legend. The Oracle of Delphi was one of the m ...

"The Oracle of Rama shows us how we can make karmically appropriate choices so that we can live a life of joy and fulfillment" states Deepak Chopra. The Oracle Of Rama is perhaps the greatest oracle of India, as well as one o ...

Tarot divination is not fortune telling. The practice of fortune- telling is based on the false notion that human life is governed by luck, chance, fate, or obscure powers at work outside the personality. True divination rest ...

“God pummeled me. My most horrific experience. Also my best.” The Oracle is the enlightenment of a profound principle the author learned during a desperate season of his life. The power to transform a life finally awakene ...

Aldin has always felt out of place. In her fifteen years of life as a refugee alongside her parents in the small elf enclave of Lar, she's never displayed a single one of the gifts for which her race, the oracles, are known. ...

Welcome to the incredibly beautiful and intriguing world of the Tarot. The purpose of this book, Rebirth of the Oracle - The Tarot for the Modern World, is to simplify and demystify this ancient oracle and to make it accessib ...

The Mystery of the Shemitah Updated Edition par Jonathan Cahn

New York Times Best Seller! Over 2,700 5-Star Reviews From the author that brought you NEW YORK TIMES best sellers The Book of Mysteries, The Harbinger, and The Paradigm with over 3 MILLION copies sold "Rabbi Jonathan Cahn is ...

Under the rule of a usurper king, the realm of Skala has suffered famine, plague, and invasion. But now the time for the rightful heir has come, a return to the tradition of warrior queens. And the Lightbearer’s prophecy is ...

The Oracle of Ur par Penny Barron

WHAT IS THE POINT OF KNOWING IF NOBODY WILL LISTEN? Ancient Sumer, 3800 BC. Indentured and forced into prostitution to survive, a reluctant seer known only as Girl, finds herself experiencing cataclysmic visions. Kaylem, most ...

The #1 New York Times bestselling author of the Three Dark Crowns series introduces readers to the Oracle Queen in this riveting prequel novella. Fans of the series will be enthralled with Queen Elsabet’s genesis, riveted b ...

Be it in your working, romantic or physical life, wise words of wisdom walk with you, to provide the answers. The Book of Destiny is a divination tool, incorporating common sayings with their meaning, a focus word, an image a ...

Since 1899 more than 73,000 pieces of inscribed divination shell and bone have been found inside the moated enclosure of the Anyang-core at the former capital of the late Shang state. Nearly all of these divinations were done ...

The Oracle of Oil: A Maverick Geologist's Quest for a Sustainable Future par Mason Inman

The first comprehensive biography of Marion King Hubbert, the "father of peak oil." In 1956, geologist and Shell Oil researcher Marion King Hubbert delivered a speech that has shaped world energy debates ever since. Addressin ...

The Light of the Oracle par Victoria Hanley

Bryn is the daughter of a humble stone-cutter. So no one is more surprised than she when the Master Priest seeks her out to become a student at the famous Temple of the Oracle; a training school for future priests and prieste ...

Mariuccia Umbellino is a young woman living in the remote mountain village of Montemonaco, Italy, in the early years of the 19th century. Nearby, the secret recesses of the Grotto of the Fates—home to an ancient oracle of A ...

Examining the final years of Delphic consultation, this monograph argues that the sanctuary operated on two connected, yet distinct levels: the oracle, which was in decline, and the remaining religious, political and social e ...

The ORACLE, a mysterious cat who can read minds and only drinks Bud Light, leads a group of special animals - - an iguana, a black squirrel, a Bull Terrier - Chihuahua mix, and a talking parrot -- to help the patrons of Ulyss ...

Applied SOA Patterns on the Oracle Platform is aimed at architects practicing SOA or traditional integration, and also at technical team leaders implementing Oracle Fusion under SCRUM or WF methodology. ...

Check out a book and read your future. . . . It's another page-turning adventure from #1 New York Times bestselling author D. J. MacHale! Marcus is an agent of the Library, a place filled with tales that don't have an ending. ...

NEW YORK TIMES BEST SELLER INSTANT NATIONAL BEST SELLER!! Debuted at No. 5 on the New York Times Best Seller list, as well as at No. 5 on Wall Street Journal and No. 6 on the Publisher’s Weekly lists. ​ Over 300K copies s ...

This book offers a unique insight into the remarkable Greco-Roman archaeology which surrounds the Temple of Apollo at Didyma, the second most important oracular sanctuary in antiquity. The author has expunged the stuffy and m ...

Valerio Massimo Manfredi's The Oracle is a modern thriller inspired by an ancient prophecy. 1973. Professor Periklis Harvatis, working alone and late into the night on an important archaeological dig, unearths a magnificent g ...

The second book in the ancient Greek Mysteries series, a thrilling follow up to Mark of the Cyclops, is a mix of Sherlock Holmes and ancient Greece from bestselling author Saviour Pirotta, with stunning illustrations from up- ...

The Original I Ching Oracle or The Book of Changes par Rudolf Ritsema,Shantena Augusto Sabbadini

Often referred to as the Eranos edition, this revised and updated translation offers the most substantial advance in I Ching since Richard Wilhelm introduced the oracle to the West in the 1920s. The I Ching is one of the olde ...

The Oracle and the Curse par Caleb Smith

New York Times Best Seller! 1500 5-Star Reviews! From the author that brought you NEW YORK TIMES best selling books The Harbinger, The Mystery of the Shemitah, and The Paradigm selling over 3 MILLION copies Imagine if you dis ...

“If you sing before breakfast you will cry before supper...' In their own words, what it meant for Victorians to dream of actors, April Fools, herrings or a railway ticket – why it was advised to throw a black snail by it ...

The Oracle Way to Consulting: What it Takes to Become a World-Class Advisor par Kim Miller

Become a master consultant using the training program created and used by Oracle The Oracle Consulting Way provides the essential tools and people skills a consultant must have to build trusted client relationships that lead ...

This book is a fulfillment of the dream of the sage of transcendentalism, Ralph Waldo Emerson and B.F.Skinner to demystify the workings of the human mind, with reference to ability, interest, Talents and creative endowments. ...

What is wisdom? Where does it come from? Where can we find it? And what does it mean in our lives? In Secrets of the Oracle, David Shaw explores these questions by turning to the works of wisdom writers, whose words retain th ...

Everything I Never Told You

The Mysterious Affair at Styles