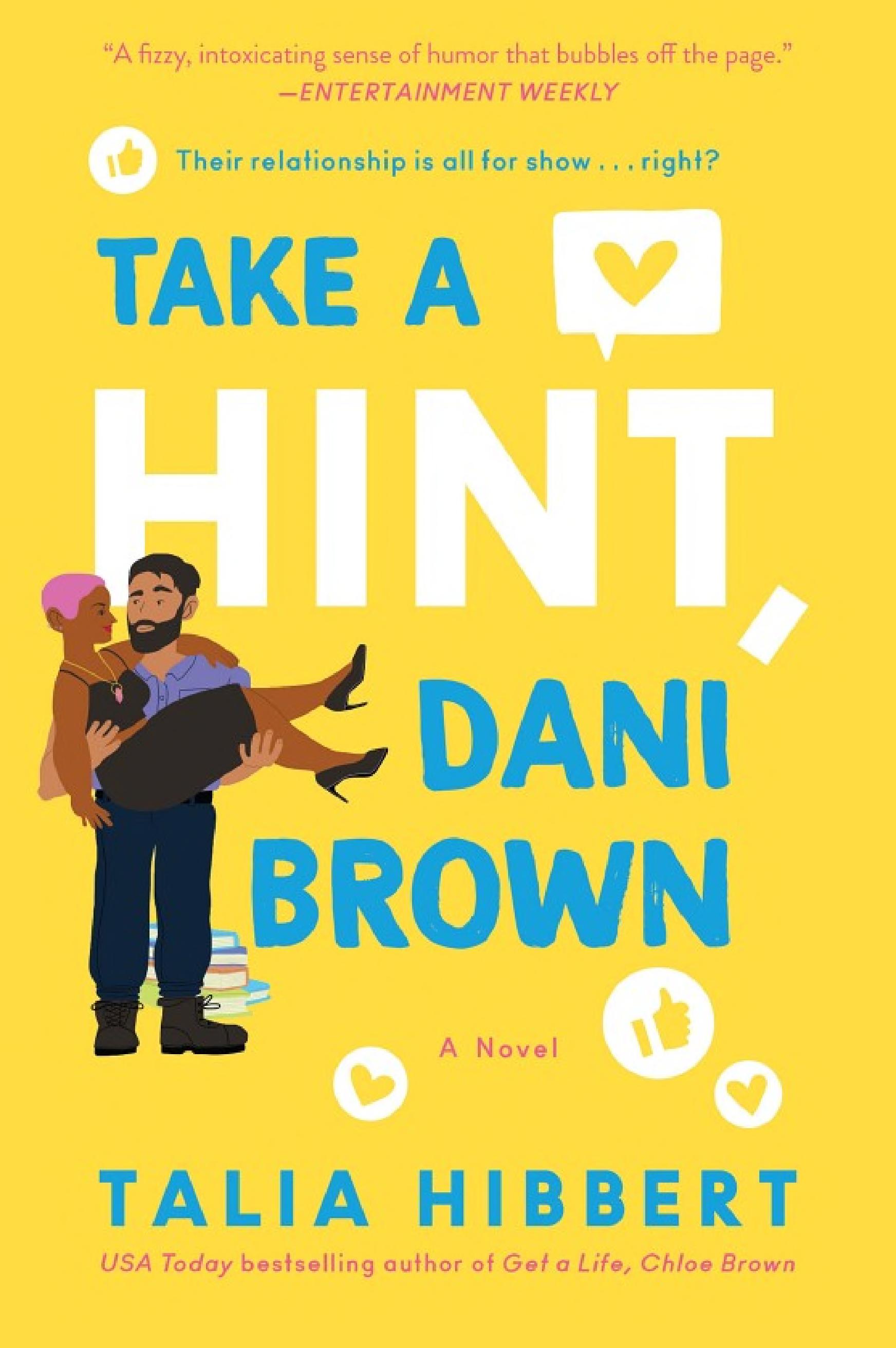 Named one of the Best Romances of 2020 by Apple, Kirkus, PW, Washington Post, NPR, BookPage, OprahMag, EW, Insider, Buzzfeed, Bustle, and Amazon! USA Today bestselling author Talia Hibbert returns with another charming romantic comedy about a young woman who agrees to fake date her friend after a video of him “rescuing” her from their office building goes viral... Danika Brown knows what she wants: professional success, academic renown, and an occasional roll in the hay to relieve all that career-driven tension. But romance? Been there, done that, burned the T-shirt. Romantic partners, whatever their gender, are a distraction at best and a drain at worst. So Dani asks the universe for the perfect friend-with-benefits—someone who knows the score and knows their way around the bedroom. When big, brooding security guard Zafir Ansari rescues Dani from a workplace fire drill gone wrong, it’s an obvious sign: PhD student Dani and former rugby player Zaf are destined to sleep together. But before she can explain that fact to him, a video of the heroic rescue goes viral. Suddenly, half the internet is shipping #DrRugbae—and Zaf is begging Dani to play along. Turns out his sports charity for kids could really use the publicity. Lying to help children? Who on earth would refuse? Dani’s plan is simple: fake a relationship in public, seduce Zaf behind the scenes. The trouble is, grumpy Zaf is secretly a hopeless romantic—and he’s determined to corrupt Dani’s stone-cold realism. Before long, he’s tackling her fears into the dirt. But the former sports star has issues of his own, and the walls around his heart are as thick as his... um, thighs. The easy lay Dani dreamed of is now more complex than her thesis. Has her wish backfired? Is her focus being tested? Or is the universe just waiting for her to take a hint? “Talia Hibbert is a rockstar! Her writing is smart, funny, and sexy..." - Meg Cabot, #1 New York Times bestselling author of the Little Bridge Island and Princess Diaries series Featured in OprahMag, Bustle, Parade, PopSugar, New York Post, Essence, Travel & Leisure, Ms. Magazine, TheSkimm, Betches, Shondaland, Buzzfeed and more...

From bestselling author Talia Hibbert comes a story of wicked royals, fake engagements, and the fed-up office worker trapped in the midst of it all… Cherry Neita is thirty, flirty, and done with men. As far as she can tell, ...

AN INSTANT NEW YORK TIMES BESTSELLER In Talia Hibbert’s newest rom-com, the flightiest Brown sister crashes into the life of an uptight B&B owner and has him falling hard—literally. Featured on Parade, PopSugar, Marie Cla ...

Thelma and Louise gets remade in this powerful, darkly funny teen novel from acclaimed authors Brittany Cavallaro and Emily Henry. Two teenage girls who have had enough of the controlling men in their lives take their rage on ...

When the Sky Fell on Splendor par Emily Henry

From the #1 New York Times bestselling author of People We Meet on Vacation, Emily Henry's A Song Below Water meets Stranger Things novel is a gripping story about a group of friends in a small town who find themselves dealin ...

“The Right Swipe is everything you want in a Summer read: fun, clever, and so, so sexy.” — Popsugar Alisha Rai returns with a sizzling new novel, in which two rival dating app creators find themselves at odds in the boa ...

Lean Your Loneliness Slowly Against Mine par Klara Hveberg

LONGLISTED FOR THE PEN TRANSLATION PRIZE * A NEW YORK TIMES GLOBETROTTING PICK A remarkable and heartbreaking debut novel with the lyrical beauty and emotional resonance of By Grand Central Station I Sat Down and Wept and the ...

“Like a dish of comfort food you’ll want to devour.” —The Washington Post “It’s hard to say which aspect of TJ Alexander’s novel is sweeter: the slow-burn romance or the drool-worthy desserts.” —Time A high- ...

Wait For It par Jenn McKinlay

A woman looking for a new lease on life moves to Arizona where she rents a guest house on a gorgeous property with a mysterious owner—a man who teaches her about resilience, courage, and ultimately true love, in this funny, ...

Now a New York Times bestseller! A gripping, ripped-the-headlines thriller from writing sensation Natasha Preston. "Lily?" My stomach dropped as a tall, dark-haired man stepped into view. Had he been hiding between the trees? ...

New York Times-bestselling author Meg Cabot returns with a charming romance between a children's librarian and the town sheriff in the second book in the Little Bridge Island series. Welcome to Little Bridge, one of the small ...

Something to Talk About par Meryl Wilsner

A showrunner and her assistant give the world something to talk about when they accidentally fuel a ridiculous rumor in this debut romance. Hollywood powerhouse Jo is photographed making her assistant Emma laugh on the red ca ...

Not the Girl You Marry par Andie J. Christopher

How To Lose a Guy in 10 Days gets a millennial makeover in this romantic comedy by USA Today bestselling author Andie J. Christopher. “The way Jack sets out to win Hannah back is really the stuff of true romance.”—NPR J ...

She’s not just my ex-girlfriend. She’s my new coworker. I knew Lucy Dillard was The One the first time I met her. Yes, I’m enough of a sap to believe in love at first sight. When I fell for Lucy, I fell hard. Everything ...

USA Today bestselling author Jenny Holiday follows A Princess for Christmas with another delightful contemporary Christmas romance, set in the heart of New York City, about a playboy baron and a woman who has said goodbye to ...

It wouldn’t be the theater without a few theatrics… Becoming a famous playwright is all Winnie ever dreamed about. For now, though, she'll have to settle for assisting the celebrated, sharp-witted feminist playwright Juli ...

Will Sedgwick can’t believe that after months of searching for his oldest friend, Martin Easterbrook is found hiding in an attic like a gothic nightmare. Intent on nursing Martin back to health, Will kindly kidnaps him and ...

In a delightful follow-up to Written in the Stars, Alexandria Bellefleur delivers another queer rom-com about a hopeless romantic who vows to show his childhood crush that romance isn’t dead by recreating iconic dates from ...

A Match Made in Lipa par Carla de Guzman

A smart and delightful romantic comedy featuring fabulous female friendships and "a great love story." --Jasmine Guillory, bestselling author of Party of Two Samiah Brooks never thought she would be "that" girl. But a live tw ...

Protective. Obsessive. And rough around the edges. James Foster knows the rules: you don’t fall for your best friend’s little sister. Nina is too young, too reckless, and too busy saving the world to be tied down by the c ...

In Case You Missed It par Lindsey Kelk

What if Mr Right was right in front of you all along? Don’t miss the laugh out loud brand-new romantic comedy from the Sunday Times bestselling author! ‘Swoops you up and fills your heart with such joy’ Giovanna Fletche ...

Can your worst enemy become the love of your life? A fun, feisty, feel-good romance for fans of Sophie Kinsella and Meg Cabot. Jennifer and Ian have known each other for seven years. They are leaders of two different teams in ...

Second chances are sweeter than ever in Charlotte Stein’s steamy Dark Obsession series—perfect for fans of Katy Evans—as a self-reliant college girl falls for a reformed bully who’s desperate to make up for lost time. ...

All About Us par Tom Ellen

A chance encounter leads to the journey of a lifetime in this powerful and emotional love story, perfect for fans of One Day, Me Before You and In Five Years. *** ...

Cash Evans knows exactly what he wants for Christmas. Too bad he can’t have her. The infamous tattoo artist’s been watching geeky Bailey Cooper for months, but that’s all he’ll ever do: watch. Bailey’s too sweet, to ...

Lyra. Lucy. Percy. Once in a generation, a hero emerges whose story enthralls readers worldwide. Fireborn is an epic quest, perfect for fans of the His Dark Materials and The School for Good and Evil series, that will spin re ...

From the author of The Bride Test comes a romance novel hailed as one of The Washington Post’s 50 Notable Works of Fiction in 2018 and one of Amazon’s Top 100 Books of 2018! “This is such a fun read and it's also quite ...

“Morgan is a masterful storyteller... For fans of Jojo Moyes, Taylor Jenkins Reid, and Stacey Ballis”-Booklist Review on One Summer in Paris USA TODAY bestselling author Sarah Morgan returns with this heartwarming novel a ...

there are two sides to every breakup. This is Jordan and Courtney, totally in love. Sure, they were an unlikely high school couple. But they clicked; it worked. They're even going to the same college, and driving cross-countr ...

The New York Times bestselling author of Pucked and The Good Luck Charm delivers a Hollywood happily-ever-after where a famous heartthrob falls for his ultimate fangirl. "As charming as its title, but it's also so much more.. ...

The Summer I Turned Pretty