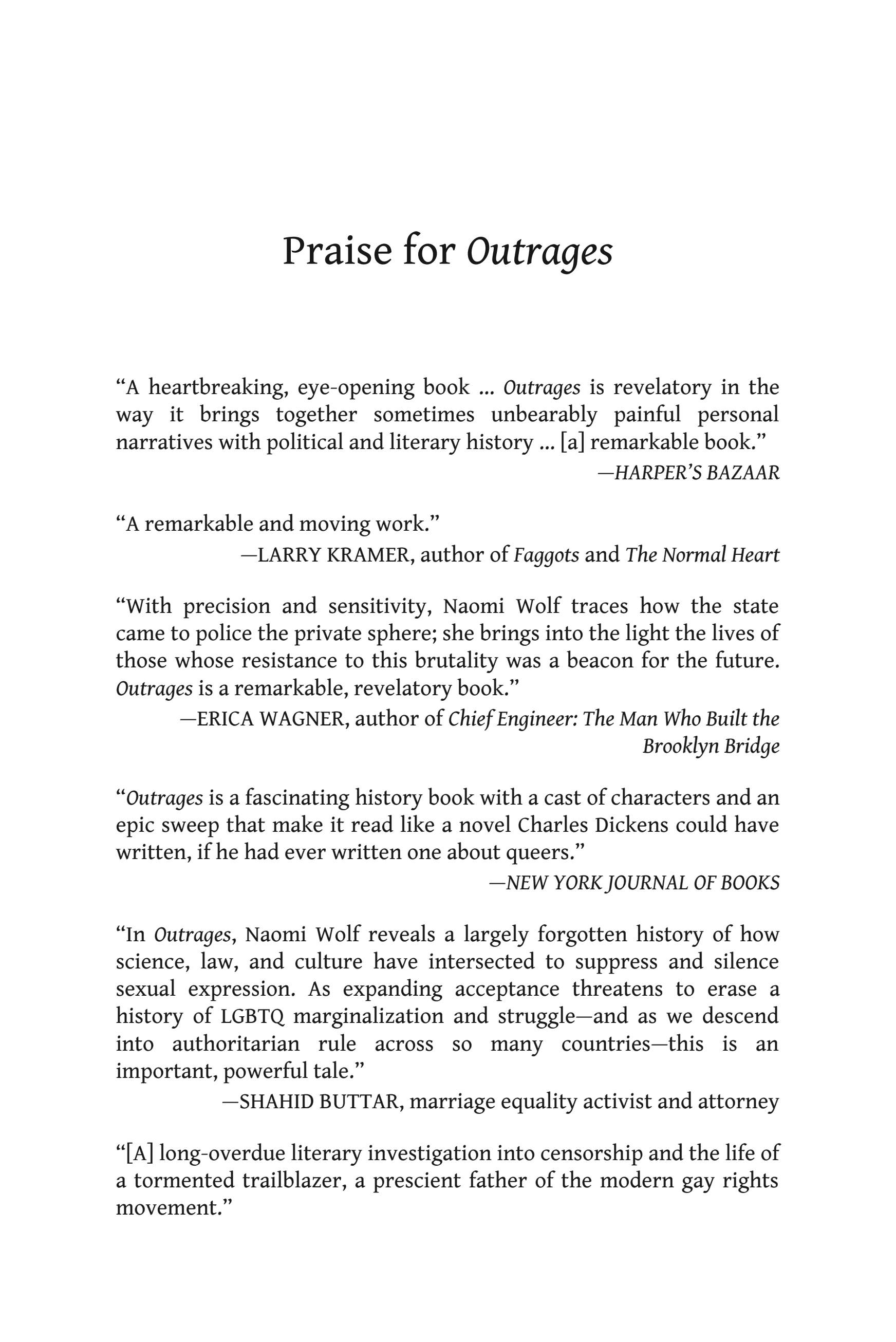 From New York Times bestselling author Naomi Wolf, Outrages explores the history of state-sponsored censorship and violations of personal freedoms through the inspiring, forgotten history of one writer’s refusal to stay silenced. Newly updated, first North American edition--a paperback original In 1857, Britain codified a new civil divorce law and passed a severe new obscenity law. An 1861 Act of Parliament streamlined the harsh criminalization of sodomy. These and other laws enshrined modern notions of state censorship and validated state intrusion into people’s private lives. In 1861, John Addington Symonds, a twenty-one-year-old student at Oxford who already knew he loved and was attracted to men, hastily wrote out a seeming renunciation of the long love poem he’d written to another young man. Outrages chronicles the struggle and eventual triumph of Symonds—who would became a poet, biographer, and critic—at a time in British history when even private letters that could be interpreted as homoerotic could be used as evidence in trials leading to harsh sentences under British law. Drawing on the work of a range of scholars of censorship and of LGBTQ+ legal history, Wolf depicts how state censorship, and state prosecution of same-sex sexuality, played out—decades before the infamous trial of Oscar Wilde—shadowing the lives of people who risked in new ways scrutiny by the criminal justice system. She shows how legal persecutions of writers, and of men who loved men affected Symonds and his contemporaries, including Christina and Dante Gabriel Rossetti, Algernon Charles Swinburne, Walter Pater, and the painter Simeon Solomon. All the while, Walt Whitman’s Leaves of Grass was illicitly crossing the Atlantic and finding its way into the hands of readers who reveled in the American poet’s celebration of freedom, democracy, and unfettered love. Inspired by Whitman, and despite terrible dangers he faced in doing so, Symonds kept trying, stubbornly, to find a way to express his message—that love and sex between men were not “morbid” and deviant, but natural and even ennobling. He persisted in various genres his entire life. He wrote a strikingly honest secret memoir—which he embargoed for a generation after his death—enclosing keys to a code that the author had used to embed hidden messages in his published work. He wrote the essay A Problem in Modern Ethics that was secretly shared in his lifetime and would become foundational to our modern understanding of human sexual orientation and of LGBTQ+ legal rights. This essay is now rightfully understood as one of the first gay rights manifestos in the English language. Naomi Wolf’s Outrages is a critically important book, not just for its role in helping to bring to new audiences the story of an oft-forgotten pioneer of LGBTQ+ rights who could not legally fully tell his own story in his lifetime. It is also critically important for what the book has to say about the vital and often courageous roles of publishers, booksellers, and freedom of speech in an era of growing calls for censorship and ever-escalating state violations of privacy. With Outrages, Wolf brings us the inspiring story of one man’s refusal to be silenced, and his belief in a future in which everyone would have the freedom to love and to speak without fear.

In a stunning indictment of the Bush administration and Congress, best-selling author Naomi Wolf lays out her case for saving American democracy. In authoritative research and documentation Wolf explains how events of the las ...

The bestselling classic that redefined our view od the relationship between beauty and female identity. In today's world, women have more power, legal recognition, and professional success than ever before. Alongside the evid ...

Give Me Liberty par Naomi Wolf

In Give Me Liberty: A Handbook for American Revolutionaries, bestselling author Naomi Wolf illustrates the changes that can take place when ordinary citizens engage in the democratic system the way the founders intended and t ...

In Misconceptions, bestselling author Naomi Wolf she demythologizes motherhood and reveals the dangers of common assumptions about childbirth. With uncompromising honesty she describes how hormones eroded her sense of indepen ...

This accessible book offers support and advice for women in heterosexual marriages who discover, or are coming to terms with, their lesbianism or bisexuality. It also offers guidance for the single lovers of married women. In ...

"The first book of real magnitude to come out of the last war." —John Dos Passos John Horne Burns brought The Gallery back from World War II, and on publication in 1947 it became a critically-acclaimed bestseller. However, ...

Is there such a thing as an American gay culture--a set of styles, values, and behaviors that arises not from ethnicity or religion but from sexual orientation? How is that culture transmitted? And how is it likely to survive ...

'It's no mystery or secret how much I enjoy Lawrence Chaney.' - RuPaul 'Tackles everything from gender identity, the thrill of a wig and why Scottish talent is often overlooked.' - i News Lawrence Chaney has wowed audiences a ...

NEW YORK TIMES BESTSELLER • NAMED ONE OF THE BEST BOOKS OF THE YEAR BY THE WASHINGTON POST, NPR, AND KIRKUS REVIEWS A scathing portrait of an urgent new American crisis Over the last two decades, America has been falling de ...

Queer Italia gathers essays on Italian literature and film, medieval to modern. The volume's chronological organization reflects its intention to define a queer tradition in Italian culture. While fully cognizant of the theor ...

Historically Canadians have considered themselves to be more or less free of racial prejudice. Although this conception has been challenged in recent years, it has not been completely dispelled. In Colour-Coded, Constance Bac ...

From intimate relationships to global politics, Sarah Schulman observes a continuum: that inflated accusations of harm are used to avoid accountability. Illuminating the difference between Conflict and Abuse, Schulman directl ...

An astonishing work of cutting–edge science and cultural history from one of our most respected cultural critics and thinkers, Naomi Wolf, author of the modern classic The Beauty Myth When an unexpected medical crisis sends ...

"A welcome tribute to the persistence, precision and humanity of Washington Roebling and a love-song for the mighty New York bridge he built." -The Wall Street Journal Chief Engineer is the first full biography of a crucial f ...

This accessible book offers support and advice for women in heterosexual marriages who discover, or are coming to terms with, their lesbianism or bisexuality. It also offers guidance for the single lovers of married women. In ...

One of Bustle's Best Books of 2020! An unforgettable story of a fiercely original young woman, whose radical perspective illuminates a new way of being in the world As a full moon rises over Melbourne, Australia, a young woma ...

Archival Silences demonstrates emphatically that archival absences exist all over the globe. The book questions whether benign ‘silence’ is an appropriate label for the variety of destructions, concealment and absences th ...

A Touch of Malice