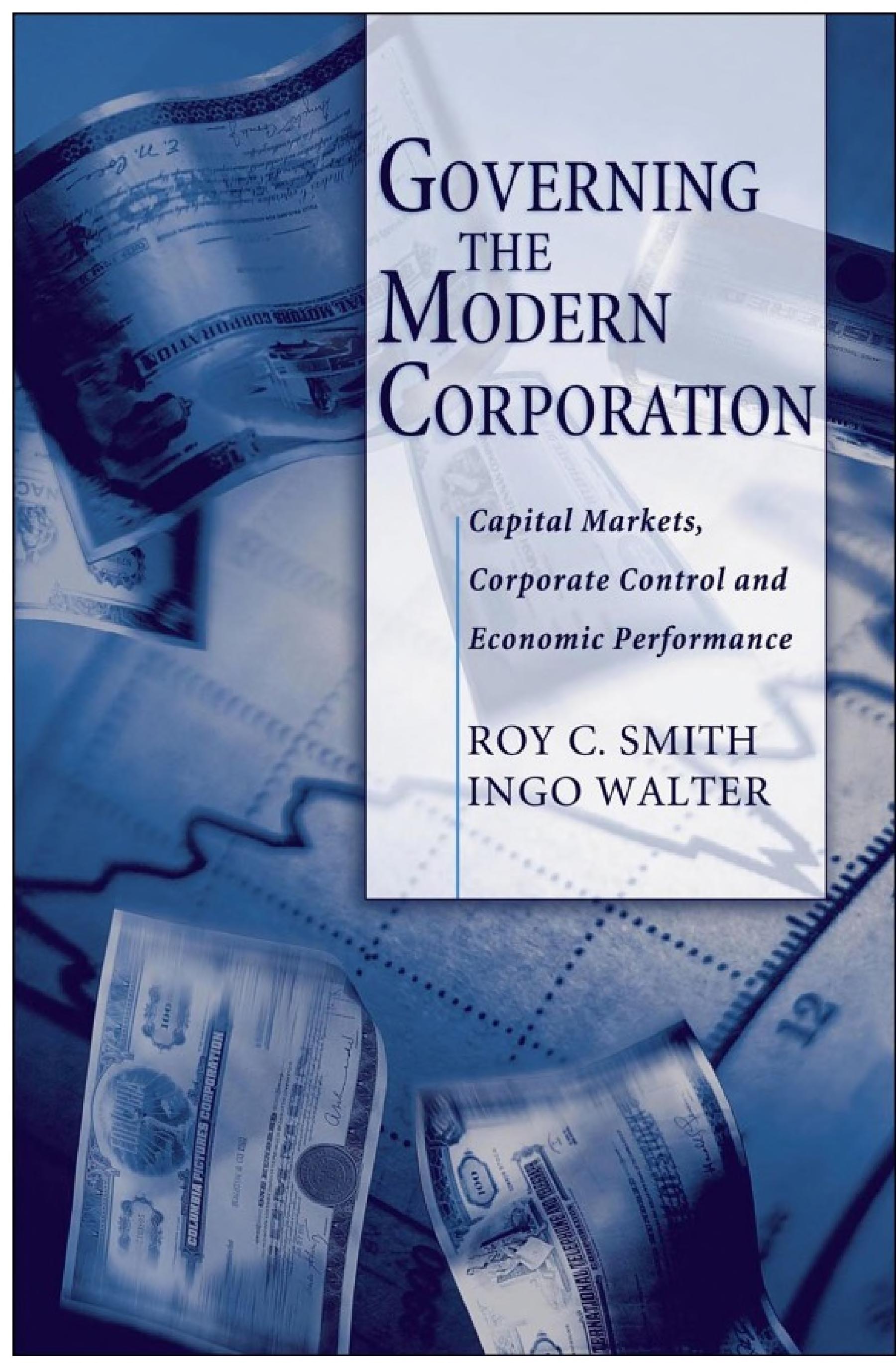 Nearly seventy years after the last great stock market bubble and crash, another bubble emerged and burst, despite a thick layer of regulation designed since the 1930s to prevent such things. This time the bubble was enormous, reflecting nearly twenty years of double-digit stock market growth, and its bursting had painful consequence. The search for culprits soon began, and many were discovered, including not only a number of overreaching corporations, but also their auditors, investment bankers, lawyers and indeed, their investors. In Governing the Modern Corporation, Smith and Walter analyze the structure of market capitalism to see what went wrong. They begin by examining the developments that have made modern financial markets--now capitalized globally at about $70 trillion--so enormous, so volatile and such a source of wealth (and temptation) for all players. Then they report on the evolving role and function of the business corporation, the duties of its officers and directors and the power of its Chief Executive Officer who seeks to manage the company to achieve as favorable a stock price as possible. They next turn to the investing market itself, which comprises mainly financial institutions that own about two-thirds of all American stocks and trade about 90% of these stocks. These investors are well informed, highly trained professionals capable of making intelligent investment decisions on behalf of their clients, yet the best and brightest ultimately succumbed to the bubble and failed to carry out an appropriate governance role. In what follows, the roles and business practices of the principal financial intermediaries--notably auditors and bankers--are examined in detail. All, corporations, investors and intermediaries, are found to have been infected by deep-seated conflicts of interest, which add significant agency costs to the free-market system. The imperfect, politicized role of the regulators is also explored, with disappointing results. The entire system is seen to have been compromised by a variety of bacteria that crept in, little by little, over the years and were virtually invisible during the bubble years. These issues are now being addressed, in part by new regulation, in part by prosecutions and class action lawsuits, and in part by market forces responding to revelations of misconduct. But the authors note that all of the market's professional players--executives, investors, experts and intermediaries themselves--carry fiduciary obligations to the shareholders, clients, and investors whom they represent. More has to be done to find ways for these fiduciaries to be held accountable for the correct discharge of their duties.

Written more than a half-century ago, The Modern Corporation and Private Property remains the fundamental introduction to the internal organization of the corporation in modern society. Combining the analytical skills of an a ...

Forty years ago, managerialism dominated corporate governance. In both theory and practice, a team of senior managers ran the corporation with little or no interference from other stakeholders. Shareholders were essentially p ...

This book explores the revolutionary development of the theory of the firm over the past 35 years. Despite rapid progress in the field, new developments in the microeconomic and industrial organization literature have been re ...

The contributors to Corporate Citizen explore the legal frameworks and standards of conduct for multinational corporations. In a globalized world governed by domestic and international law, these corporations can be everywher ...

The Handbook of the Economics of Corporate Governance par Benjamin Hermalin,Michael Weisbach

The Handbook of the Economics of Corporate Governance, Volume One, covers all issues important to economists. It is organized around fundamental principles, whereas multidisciplinary books on corporate governance often concen ...

The governance of the modern corporation is broadly understood as the mechanisms, relations, and processes for balancing the interests of stakeholders. It spells out the rules and procedures for decision-making, accountabilit ...

While corporate governance has been a successful concept throughout the centuries, it is in question whether this concept can remain sustainable in the digital era and during a time of technological and managerial disruption. ...

While corporate governance has been a successful concept throughout the centuries, it is in question whether this concept can remain sustainable in the digital era and during a time of technological and managerial disruption. ...

Progressive Corporate Governance for the 21st Century is a wide ranging and ambitious study of why corporate governance is the shape that it is, and how it can be better. The book sets out the emergence of shareholder primacy ...

Comparative Corporate Governance considers the effects of globalization on corporate governance issues and highlights how, despite these widespread consequences, predictions of legal convergence have not come true. By adoptin ...

The Oxford Handbook of the Corporation assesses the contemporary relevance, purpose, and performance of the corporation. The corporation is one of the most significant, if contested, innovations in human history, and the dire ...

Corporate governance for public companies in the United States today is a fragile balance between shareholders, board members, and CEOs. Shareholders, who are focused on profits, put pressure on boards, who are accountable fo ...

In the context of the financial and economic crisis, corporate governance and regulatory supervision failures, Laura Horn investigates one of the defining questions in social power relations in contemporary capitalism: who co ...

The behavior of managers-such as the rewards they obtain for poor performance, the role of boards of directors in monitoring managers, and the regulatory framework covering the corporate governance mechanisms that are put in ...

What role do independent institutional investors play in the corporate governance of listed German companies? The authors provide insight into an empirical and qualitative research study, exploring the importance of communica ...

Since they were issued in 1999, the OECD Principles of Corporate Governance have gained worldwide recognition as an international benchmark for good corporate governance. ...

A new edition of the #1 text in the human computer Interaction field! This book seeks to chart the technology-fueled changes taking place in the field of corporate governance and describes the impact these changes are having ...

'Judging by the academic post-mortems, the 2008 economic collapse was triggered by a financial sector gone wild. But the collapse was also made possible by defects in corporate governance. At last, this volume offers a seriou ...

The Mountain Is You

Principles for Dealing with the Changing World Order