Embassy of the Empire 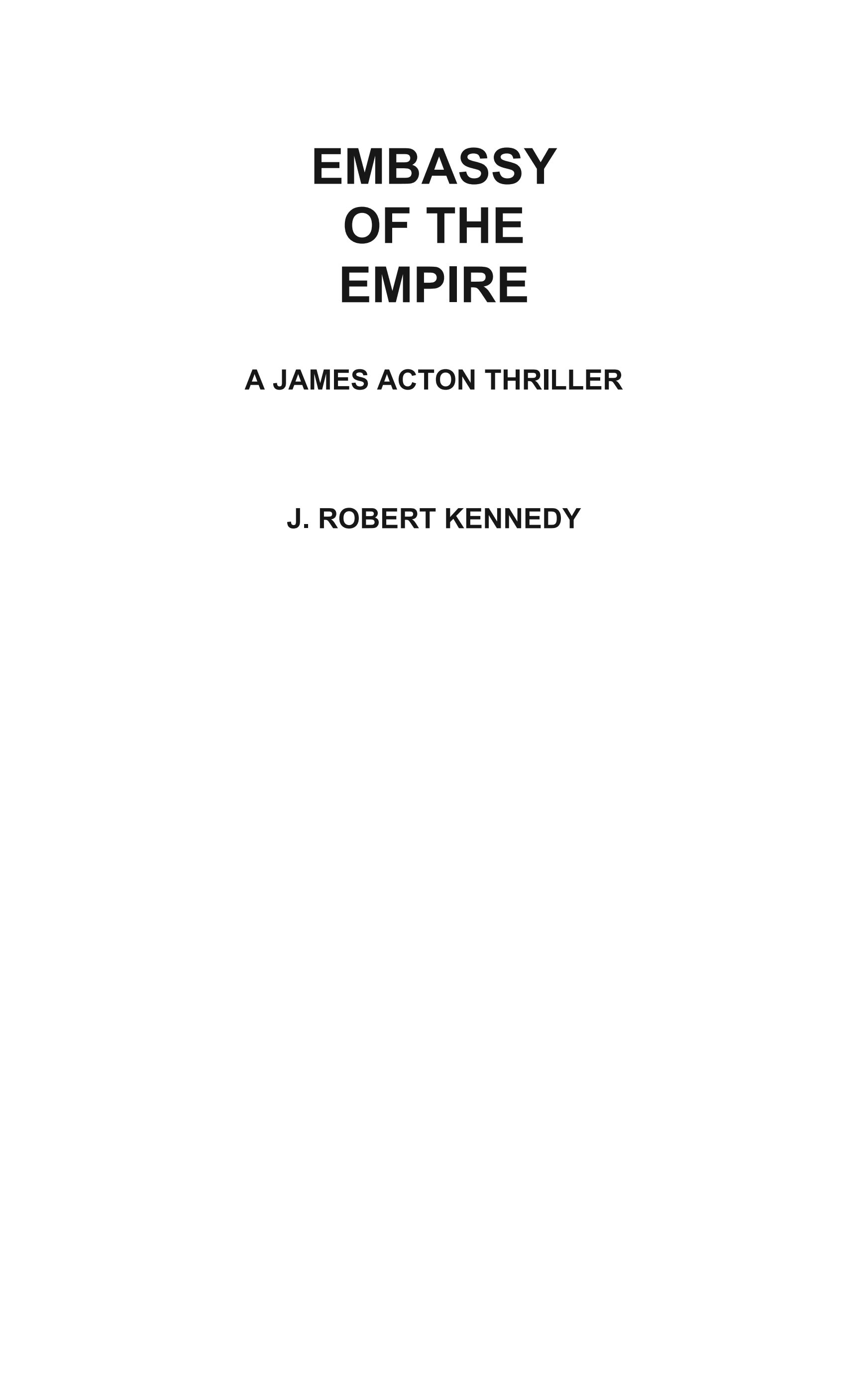 *** FROM USA TODAY & MILLION COPY BESTSELLING AUTHOR J. ROBERT KENNEDY *** AN INCIDENT ON THE HIGH SEAS RISKS WAR BETWEEN THE USA AND CHINA. AND AN INNOCENT ARCHAEOLOGICAL TEAM IS CAUGHT IN THE MIDDLE. Almost two-thousand years ago, the Roman Empire established its first embassy in Han China, and something went horribly wrong, the mission now a mere footnote in history. And today, in London, a shocking discovery is made that may be linked to those unfortunate events, and the proof could lie in the ancient capital of the Han Empire. In a hunt for the truth, Archaeology Professors James Acton and Laura Palmer travel to China to investigate a stunning discovery—the ruins of the doomed Roman Embassy. As they arrive, a terrifying incident between two of the world’s most powerful militaries unfolds, sending not only the globe into a panic, but an innocent team of archaeologists fleeing for their lives. It is a race against time to find safe-harbor before war is declared, and the innocent become pawns in what could devolve into World War Three. In Embassy of the Empire, award winning and USA Today bestselling author J. Robert Kennedy once again mixes history and today’s headlines in a shocking international thriller sure to leave you burning through the pages into the late hours. If you enjoy fast-paced adventures in the style of Dan Brown, Clive Cussler, and James Rollins, then you’ll love this thrilling tale of archaeological intrigue. Get your copy of Embassy of the Empire now, and see what happens when two great empires collide—two millennia ago, and today… About the James Acton Thrillers: ★★★★★ "James Acton: A little bit of Jack Bauer and Indiana Jones!" Though this book is part of the James Acton Thrillers series, it is written as a standalone novel and can be enjoyed without having read any of the previous installments. ★★★★★ “Non-stop action that is impossible to put down.” The James Acton Thrillers series and its spin-offs, the Special Agent Dylan Kane Thrillers and the Delta Force Unleashed Thrillers, have sold over one million copies. If you love non-stop action and intrigue with a healthy dose of humor, try James Acton today! ★★★★★ “A great blend of history and current headlines.” USA Today bestselling author J. Robert Kennedy’s novels are ideal for fans of Dan Brown, Clive Cussler, James Rollins, Tom Clancy, and James Patterson, and those who enjoy intense action and intrigue with a healthy dose of humor and a touch of romance. Readers interested in action adventure, archaeological mysteries, historical fiction, men’s adventure, conspiracies and ancient mysteries, will love the James Acton Thrillers. If spies and espionage is your thing, then check out the CIA Special Agent Dylan Kane Thrillers for riveting tradecraft action. And for those who prefer the team approach and Special Forces, check out the Delta Force Unleashed series for exciting military thrills. Or maybe you just feel like a mystery? Check out the Detective Shakespeare Mysteries for dark, intense psychological thrillers. Into the Templars? Then the Templar Detective Thrillers are for you!

From the bestselling author of Destiny of the Republic, this thrilling biographical account of the life and legacy of Wintson Churchill is a "nail-biter and top-notch character study rolled into one" (The New York Times). At ...

This timely project on the Arab Spring was initiated to provide The Asan Institute's own assessment of the changes currently taking place in the region and their significant implications for South Korea. ...

Music and Diplomacy from the Early Modern Era to the Present par R. Ahrendt,M. Ferraguto,D. Mahiet

How does music shape the exercise of diplomacy, the pursuit of power, and the conduct of international relations? Drawing together international scholars with backgrounds in musicology, ethnomusicology, political science, cul ...

Fully revised and updated, this comprehensive guide to diplomacy explores the art of negotiating international agreements and the channels through which such activities occur when states are in diplomatic relations, and when ...

State, Religion, and Revolution in Iran, 1796 to the Present par B. Moazami

Two basic assumptions have shaped understanding of recent Iranian history. One is that Shi'ism is an integral part of Iran's religious and cultural landscape. The other is that the ulama (religious scholars) have always playe ...

Jahangir was the fourth of the six “Great Mughals,” the oldest son of Akbar the Great, who extended the Mughal Empire across the Indian Subcontinent, and the father of Shah Jahan, builder of the Taj Mahal. Although an alc ...

The History of Rasselas, Prince of Abissinia par Samuel Johnson

In Samuel Johnson’s classic philosophical tale, the prince and princess of Abissinia escape their confinement in the Happy Valley and conduct an ultimately unsuccessful search for a choice of life that leads to happiness. J ...

During the EOKA period of Greek Cypriot revolt against British colonial rule, the Greek Cypriots and the British deployed propaganda as a means of swaying allegiances, both within Cyprus and on the international scene. Propag ...

NEW YORK TIMES BESTSELLER From the diplomat Putin wants to interrogate—and has banned from Russia—a revelatory, inside account of U.S.-Russia relations from 1989 to the present “A fascinating and timely account of the c ...

History of the War in Afghanistan, Vol. I (of 3) par John William Kaye

Example in this ebook CHAPTER I. [1800-1801.] At the dawn of the present century, Zemaun Shah reigned over the Douranee Empire. The son of Timour Shah, and the grandson of the illustrious Ahmed Shah, he had sought, on the dea ...

Remain in Your Calling explores the way the Apostle Paul negotiates and transforms existing social identities of the Corinthian Christ-followers in order to extend his gentile mission. Building on the findings of Tucker's fir ...

The Rough Guide to Southeast Asia on a Budget is the ultimate guide for budget-conscious independent travellers visiting this fascinating region. Updated by young, enthusiastic writers, the guide has detailed practical inform ...

The defining moment of the Cold War: 'The beginning of the end of the Soviet empire.' (Richard Nixon) The Hungarian Revolution in 1956 is a story of extraordinary bravery in a fight for freedom, and of ruthless cruelty in sup ...

Cameroon stands as a remarkable example of nation-building in the aftermath of European domination. Split between the French and British empires after World War I, it experienced a unique drive for self-determination at the t ...

An Ecclesiastical History to the 20th Year of the Reign of Constantine par Eusebius,Aeterna Press

If history he accurately defined as philosophy teaching by examples, no branch of it can contain lessons of philosophy so interesting and important as the history of the church. Taking the terms in the most comprehensive sens ...

This volume is the product of scholars of various backgrounds, specialties and agendas bringing forth their most treasured findings regarding the Chinese Catholic Church. The chapters in this book covering the church from 190 ...

The impacts of human-induced climate change are largely mediated by water, such as alterations in precipitation and glacial melt patterns, variations in river flow, increased occurrence of droughts and floods, and sea level r ...

We Were Never Here