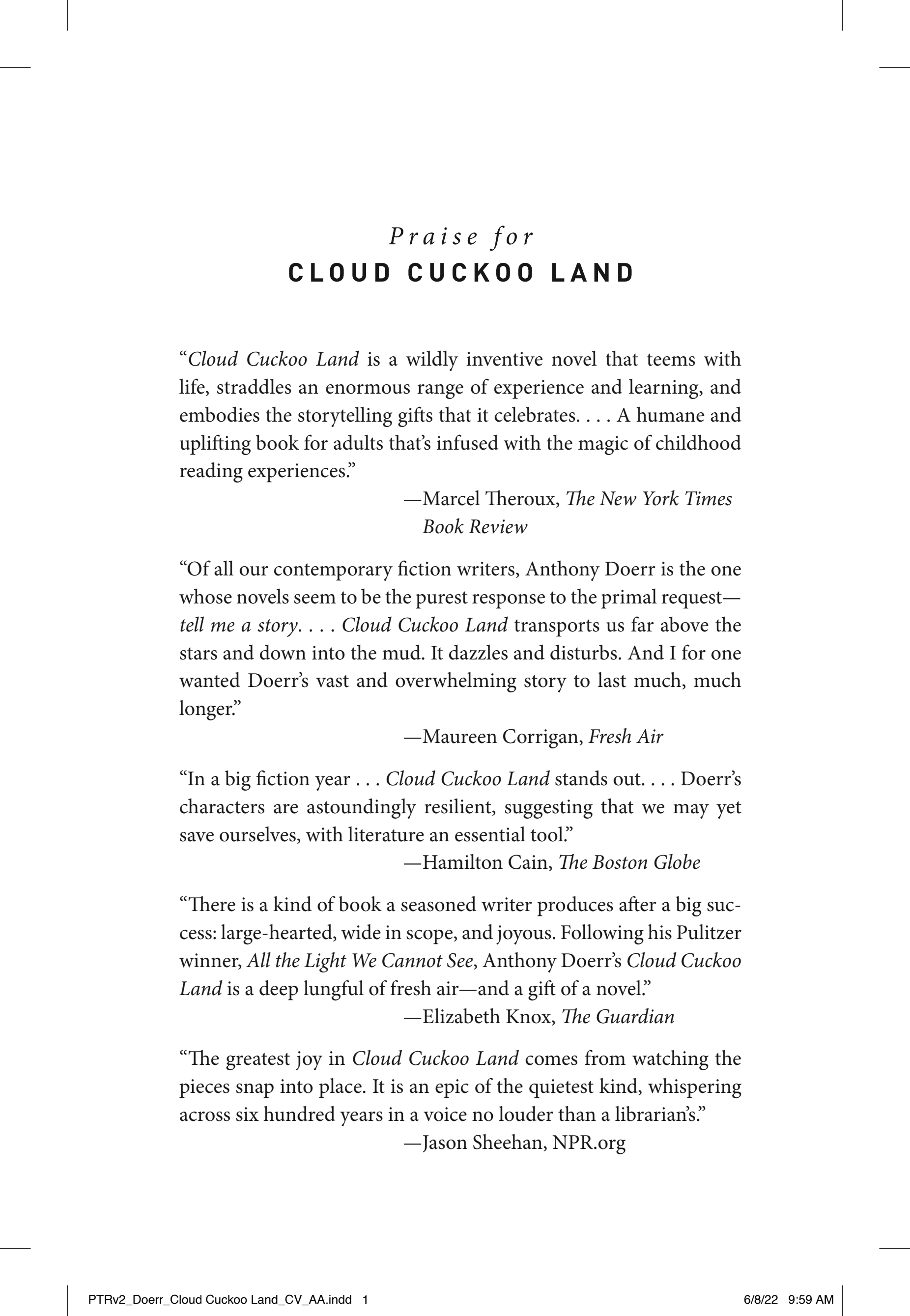 On the New York Times bestseller list for 19 weeks * A New York Times Notable Book * A Barack Obama Favorite * A National Book Award Finalist * Named a Best of the Year by Fresh Air, Time, Entertainment Weekly, Associated Press, and many more—one of the ten books that appeared on the most lists for 2021 “If you’re looking for a superb novel, look no further.” —The Washington Post From the Pulitzer Prize–winning author of All the Light We Cannot See, comes the instant New York Times bestseller that is a “wildly inventive, a humane and uplifting book for adults that’s infused with the magic of childhood reading experiences” (The New York Times Book Review). Among the most celebrated and beloved novels of 2021, Anthony Doerr’s gorgeous third novel is a triumph of imagination and compassion, a soaring story about children on the cusp of adulthood in worlds in peril, who find resilience, hope—and a book. In Cloud Cuckoo Land, Doerr has created a magnificent tapestry of times and places that reflects our vast interconnectedness—with other species, with each other, with those who lived before us, and with those who will be here after we’re gone. Thirteen-year-old Anna, an orphan, lives inside the formidable walls of Constantinople in a house of women who make their living embroidering the robes of priests. Restless, insatiably curious, Anna learns to read, and in this ancient city, famous for its libraries, she finds a book, the story of Aethon, who longs to be turned into a bird so that he can fly to a utopian paradise in the sky. This she reads to her ailing sister as the walls of the only place she has known are bombarded in the great siege of Constantinople. Outside the walls is Omeir, a village boy, miles from home, conscripted with his beloved oxen into the invading army. His path and Anna’s will cross. Five hundred years later, in a library in Idaho, octogenarian Zeno, who learned Greek as a prisoner of war, rehearses five children in a play adaptation of Aethon’s story, preserved against all odds through centuries. Tucked among the library shelves is a bomb, planted by a troubled, idealistic teenager, Seymour. This is another siege. And in a not-so-distant future, on the interstellar ship Argos, Konstance is alone in a vault, copying on scraps of sacking the story of Aethon, told to her by her father. She has never set foot on our planet. Like Marie-Laure and Werner in All the Light We Cannot See, Anna, Omeir, Seymour, Zeno, and Konstance are dreamers and outsiders who find resourcefulness and hope in the midst of gravest danger. Their lives are gloriously intertwined, and Doerr’s dazzling imagination transports us to worlds so dramatic and immersive that we forget, for a time, our own. Dedicated to “the librarians then, now, and in the years to come,” Cloud Cuckoo Land is a beautiful and redemptive novel about stewardship—of the book, of the Earth, of the human heart.

All the Light We Cannot See par Anthony Doerr

From his home in a West Yorkshire village proverbially associated with cuckoos, Simon Armitage has been probing the night sky with the aid of a powerful Russian telescope. The sequence of eighty-eight poems at the heart of Cl ...

From the author of the acclaimed Pulitzer Prize-winning #1 New York Times bestseller All the Light We Cannot See and Cloud Cuckoo Land, a "dazzling" (Azar Nafisi, author of Reading Lolita in Tehran) memoir about art and adven ...

In the wise and beautiful second collection from the acclaimed, Pulitzer Prize-winning #1 New York Times bestselling author of All the Light We Cannot See, and Cloud Cuckoo Land, "Doerr writes about the big questions, the imp ...

Thirty years ago Bill McKibben offered one of the earliest warnings about climate change. Now he broadens the warning: the entire human game, he suggests, has begun to play itself out. Bill McKibben’s groundbreaking book Th ...

“I know you.” “So what . . . everyone in this shitty little town knows me. I suppose you believe the stories too.” “I said I knew you. I didn’t say I believed the stories.” While visiting the cemetery on the thi ...

Got Warrants? par Timothy A. Cotton

For the hundreds of thousands of followers of the Bangor, Maine, Police Department on social media, the "Got Warrants?" feature brings a regular dose of levity. Pulled straight from daily reports, these short interludes provi ...

OPRAH BOOK CLUB PICK 2021 SHORTLISTED FOR THE 2021 BOOKER PRIZE A heartrending new novel from the Pulitzer Prize-winning and #1 New York Times and internationally bestselling author of The Overstory. Named one of the Most Ant ...

From the author of Rise and Shine Benedict Stone, now an original movie on Hallmark. “An endearing celebration of life.” -RealSimple.com Perfect for fans of A Man Called Ove, this curiously charming debut follows a lovabl ...

It's. Nice. Outside. par Jim Kokoris

“Part Patricia Highsmith, part All About Eve and pure fun.”―Maria Semple Florence Darrow has always felt she was destined for greatness, but after a disastrous affair with her married boss, she starts to doubt herself. ...

The Mystery of Right and Wrong par Wayne Johnston

NATIONAL BESTSELLER The Mystery of Right and Wrong is a masterwork from one of the country’s most critically acclaimed and beloved writers that is both compulsively readable and heartstopping in the vital truth it unfolds. ...

From The Social cohost Cynthia Loyst, a deeply personal lifestyle book about how to take the guilt out of pleasure and get to the heart of what you need and want in all aspects of life—from family, home, and work to love an ...

The Quiet Before par Gal Beckerman

An “elegantly argued and exuberantly narrated” (The New York Times Book Review) look at the building of social movements—from the 1600s to the present—and how current technology is undermining them “A bravura work o ...

Ever since Keith Ridgway published his landmark cult novel Hawthorn & Child, his ardent fans have yearned for more Finally, Ridgway gives us A Shock, his thrilling and unsparing, slippery and shockingly good new novel. Formed ...

A Traveler at the Gates of Wisdom par John Boyne

From the award-winning author of The Heart's Invisible Furies comes an epic tale of humanity that stretches across space and time. Some stories are universal. Some are unique. They play out across human history, and time is t ...

The barren, beautiful Cumbrian fells provide the bewitching setting for the adventures of Bill and Harry , two children who find wonder at every turn as they experience the Hollow Land. Everyday challenges give a daring edge ...

“In twenty-nine separate but ingenious ways, these stories seek permanent residence within a reader. They strive to become an emotional or intellectual cargo that might accompany us wherever, or however, we go. . . . If we ...

A Thousand Times You Lose Your Treasure par Hoa Nguyen

Hoa Nguyen’s latest collection is a poetic meditation on historical, personal, and cultural pressures pre- and post-“Fall-of-Saigon” and comprises a verse biography on her mother, Diep Anh Nguyen, a stunt motorcyclist i ...

NATIONAL BESTSELLER The first novel in nearly a decade from the three-time Governor General's Award‒winning author of The Last Crossing, August Into Winter is an epic story of crime and retribution, of war and its long shad ...

Germany’s master of wit and irony now for the first time in English. Hinrich takes his existence at face value. His wife, on the other hand, has always been more interested in the after-life. Or so it seemed. When she dies ...

The Ogress and the Orphans par Kelly Barnhill

The first new novel from Kelly Barnhill since her bestselling Newbery Medal-winning The Girl Who Drank the Moon The once-lovely town of Stone-in-the-Glen has fallen on hard times. After relentless fires, floods, and other cal ...

“Willy Vlautin is not known for happy endings, but there’s something here that defies the downward pull. In the end, Lynette is pure life force: fierce and canny and blazing through a city that no longer has space for her ...

NATIONAL BESTSELLER “Ms. Haigh is an expertly nuanced storyteller long overdue for major attention. Her work is gripping, real, and totally immersive, akin to that of writers as different as Richard Price, Richard Ford, and ...

LONGLISTED FOR THE NATIONAL BOOK AWARD AND THE STORY PRIZE Award-winning author Elizabeth McCracken is an undisputed virtuoso of the short story, and this new collection features her most vibrant and heartrending work to date ...

NATIONAL BESTSELLER An achingly beautiful story of female friendship, betrayal, and a mysterious disappearance set in the changing landscape of San Francisco Teenage Eulabee and her magnetic best friend, Maria Fabiola, own th ...

Summary of Cloud Cuckoo Land - A Comprehensive Summary Cloud Cuckoo Land is about a book and how it manages to survive across time. It follows four sets of characters in different time frames that all come across an (fictiona ...

The first novel by Anthony Doerr, the highly acclaimed, multiple award-winning author of Cloud Cuckoo Land, and the Pulitzer Prize-winning #1 New York Times bestseller All the Light We Cannot See, one of the most beautiful, w ...

Rhetoric, Comedy, and the Violence of Language in Aristophanes' Clouds par Daphne O'Regan

This is an intelligent and unusually thought-provoking reading of Aristophanes' Clouds. O'Regan focuses on logos, or the power of argument, and its effects, and on the self-awareness of the second Clouds as a comedy of logos ...

The Pulitzer Prize-winning columnist discusses contemporary figures of speech, from witty stories about expressions such as "kiss and tell" and "stab in the back" to the evolution of "read my lips." NOTE: This edition does no ...

Mark Steyn's New York Times bestseller, After America, is now in paperback! Featuring a new introduction and updated throughout, After America takes on Obama's disastrous plan for our nation, and reveals exactly what a post-A ...

Carlo Ferdinando Russo's book has been a seminal work on Aristophanes since its publication in Italy in 1962. In his detailed analysis, Russo considers the plays as libretti for actors and singers rather than as mere texts, a ...

In the weeks prior to D-Day, Rommel analyzed Allied bombing patterns and concluded that they were trying to make Normandy a strategic island in order to isolate the battlefield. Rommel also noticed that the Allies had mined t ...

The fourth edition of Statutory Valuations has been completely revised and expanded and draws on the expertise of several new authors. The text reflects the effect of the considerable statutory changes over the ten years sinc ...

It Ends with Us

It's Not Summer Without You

It Happened One Summer

The Summer I Turned Pretty